Entomology (Entomon = Insect; Logos = Study) is the branch of science that deals with the study of insects. The word insect is derived from insecare which means

Insects belong to the Phylum Arthropoda which is the biggest phylum of Animal kingdom. Insects appeared 350 million years ago, much earlier than human beings who appeared on earth only 150 000 years ago. They are initially aquatic and later became terrestrial .

Insects occupy around 70 per cent of all known species of animal kingdom. The
most diverse order of insects is Coleoptera followed by Lepidoptera, Hymenoptera
and Diptera. The structural, developmental and protective characters acquired by
insects made them dominant in the animal kingdom.

Factors responsible for abundance of insects :

The insect body has an outer exoskeleton or body wall made up of cuticular protein called as chitin. This is light in weight and gives strength, rigidity and flexibility to the insect body. It is responsible for protection from Desiccation or water loss from the body
Physical or mechanical injuries and to maintain shape and size of the body, Providing area for muscle attachment, Giving strength to the body appendages

It helps the insects to exploit different ecological niches inaccessible for other animals. Insects, due to their small size, require less space (for shelter), food and energy for their survival and can easily escape from their natural enemies.

Because of hard exoskeleton, smaller size and short life cycle there is a chance of quicker species formation (more number of species at a faster rate). Changes that occur during the process of evolution through variation in their habitat or habits will be maintained or continued to several generations resulting in the development of more species from a genus.

Two pairs of wings that are present on meso and meta thoracic segments are mainly helpful for taking flight from one place to another in search of food, shelter or to find a mate, to oviposit or to get protection from their natural enemies.

Presence of six legs on the three thoracic segments, though a pair of legs are lost, the insect will have equilibrium during all the phases of it’s locomotion.

Most of the adult insects and nymphs consists of compound eyes as visual organs which possess number of hexagonal units known as ommatidia, corresponding to the cornea of an individual eye or lens. Presence of number of ommatidia in the compound eyes, even if some or few ommatidia get damaged, the insect does not loose the power of vision

The sense organs viz., visual organs, gustatory organs, organs of touch etc. are distributed on different parts of the body such as antennae, eyes, mouth parts in the head, legs with claws on thorax, tympanum, cerci in the abdomen etc. This catteredness on all parts of the body prevents the chance of all being damaged.

The nervous system is so decentralized that insects can be artificially stimulated to walk, fly, feed, mate or oviposit even if some parts of the body are removed or damaged.

Insects respire by means of thin elastic air tubes known as trachea which open outside, on the body surface through spiracles. Presence of these trachea allows free supply of oxygen to the insect and make it to be an efficient terrestrial or aerial arthropod.

In insects, excretion is mainly by means of malpighian tubules which open in between midgut and hindgut. This arrangement is well suited for water conservation as well as for the absorption of unwanted waste metabolites at a quicker rate.

Fecundity is defined as the egg laying capacity of a female insects. It helps to increase the population at faster rate.

Insects can reproduce both sexually as well as parthenogenitically. This parthenogenitic reproduction coupled with high fecundity help insects to increase their populations to large numbers, when all the biotic and abiotic factors are favourable.

Though insects posses high fecundity, there is also high degree of control over reproduction by reducing the number of females that can lay eggs. This character is mostly seen in social insects such as honey bees and termites.

Most of insects have very short life cycle i.e. 2 to 4 weeks and which help insects to complete more number of generations in a definite period of time.

There is diversity in food habits among different species of insects. As they differ in their preference for particular type of food, there will not be any competition among themselves. Less competition for food increases their chances of survival and further multiplication.

During the process of evolution, insects have shown a high degree of specialization to the extent that there is division of labour, polymorphism etc., that make them to be efficient in their struggle for existence.

For protecting themselves from adverse environmental conditions or natural enemies, insects have developed or attained some adaptations including

The body color and shape of some insects make them look like part of the plant, thereby protecting themselves from natural enemies eg: stick insects and leaf insects

Some insects produce or release poisonous or unpleasant odors from their body or possess warning coloration by imitating certain distasteful insects.

Larvae of swallow tail butterflies have eversible glands called osmeteria , located just behind the head when disturbed they release repellent volatile and waves their body back and forth to ward of intruders.

It is a defense strategy adopted by some insects (feigning death or imitating the voice of dangerous insects or mimicry).
Eg: Colarado potato beetles when disturbed , draw their legs beneath and drop to the ground and pretend as if dead.
Hairy caterpillars

Some insects construct shelter with the available plant material for protecting themselves from adverse conditions , natural enemies and to store food material for use during the period of scarcity. Eg: Cases / Bags in case of case worms/bag worms

Termatoria in case of termites, 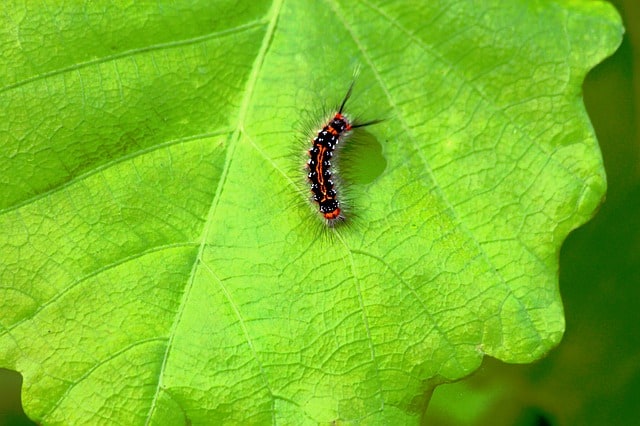