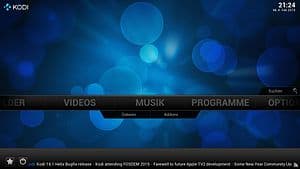 Kodi TV is capable of

Kodi tv helps to stream live video or movies directly from amazon prime, youtube, and other video or audio services. With this media player can also work as other media players like Vlc to play files from the local drive or in the networking.

Many third-party developers develop the addon for Kodi. These addon helps to improve the functionality of the player like to stream live stream of sports matches and movies. Much customizable skin is also available from the different developer like old times on windows 98.

Initially, this application was created only for first-generation Xbox game console. It was named Xbox Media Center as XBMC. Due to open source availability of software many other androids, windows, and other operating system application developed.

Many developers also develop the add-ons, which are capable of playing any copyrighted material without any legal license. This makes this app famous worldwide, especially in third-world countries.  We don’t recommend to use these add-ons to violate any copyright laws.